When I was pregnant, people would ask me if I was planning on breastfeeding. “Of course” was always my reply.

I had a notion of breastfeeding in my head that it was natural, and easy, and the baby would just know what to do. I even went to a seminar on breastfeeding at my chosen birth hospital, which further cemented my thoughts. They showed a video of baby lead attachment, which showed babies finding their way onto the breast and attaching beautifully. I walked away feeling like it would be the easiest thing in the world.

My experience was not that way at all. And having spoken to many mums on this topic, I was certainly not alone. I am writing this post in the hope that it helps new mums realise the challenges of breastfeeding, and ultimately, hope that, armed with more knowledge, that these mums will persevere and persist, and end up breastfeeding for longer.

Breastfeeding is like any new skill – both parties have to learn it, and over time it gets easier. Just like driving… the first time I was behind the wheel I remember everything was difficult – even remembering which side the indicator was on. Now it is not something I need to even think about.

The midwives in the hospital will all have different ways to show you how to get the baby to attach: rolling their head, pulling down their bottom lip, opening their mouth wide and every technique will work differently for different babies. Listen to each person and take what works for you, discard the rest.  One of the best things I did was to see a lactation consultant. She was very helpful, and offered some fine-tuning, which worked brilliantly. 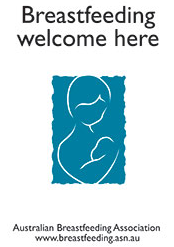 Breastfeeding also hurts! It hurts like hell! Now I don’t say this to scare women away, but to paint a realistic picture. If you know what it is all about going in, you are more likely to persist with it. So, it hurts the most when the baby first attaches. They are powerful little suckers. One technique I used was to count to 10 slowly. After 10 seconds, it would still hurt, but it would not be as intense. If it was still as intense after 20 seconds, then I would pull bub off (breaking the seal with my little finger into his mouth) and then attach him again. A very painful feed shouldn’t be ignored. If you persist through the pain, it is how you get cracked nipples – which, trust me, are a whole other world of pain!

How long does it hurt for? Everyone is different, but it will be the most intense for about 4 weeks. I had markedly reduced pain after 2 months, and by 3 months I could hardly feel anything. Now (several months later) it is like driving a car 🙂

Why do people do it? Well we all know that breast is best, and it certainly is. Breast milk is a living, dynamic food, which changes as baby changes. But the main thing is – its SO EASY! (once you learn the skill). Imagine bub waking up crying in the middle of the night hungry. It is so easy to just pop bub on (so to speak) and baby (and mummy) is back in bed in no time. In fact they say that breastfeeding mums get more sleep than formula feeding mums. And we all know that sleep is the one thing that everyone wants and no one gets in those early months!