Getting children to eat their vegetables can be such a battle sometimes. I am very lucky that my son is a “good eater” but there are plenty of kids that aren’t. I have had much experience with patients and friends regarding giving advice on how to help fussy toddlers and kids find vegetables appealing.

I think the most important thing is – don’t give too much choice early on. So, when giving meal options, give them a choice of 2 or 3 things. Put something on their plate that they love, something that they are familiar with and something that is new. Whatever the new item is, just give a tiny amount – kids can find new things very threatening so don’t overwhelm them by giving too much. Put yourselves in their shoes for a moment: imagine you are in a foreign country and are served up a dish that you have no idea what it is or what it is going to taste like. It would be a bit anxiety provoking wouldn’t it?

(this leads me to a tangent – but when I was introducing solids, I only gave my son one new food per week. I think this has partly played a role in his love of food, as I didn’t overwhelm him with too much too early).

I have a rule at my house that if my toddler doesn’t want to eat something he doesn’t have to, and I never make a fuss. “You don’t want to eat it. Ok no problems” and move on to the next topic of conversation, but we have a rule that he has to at least try the new food. Even just putting it to his lips is ok by me. I have been consistent on this rule from when I introduced solids to him and it works very well in my house.

He also only eats what is served and nothing else. I don’t get up and make two different meals. If I am following my system of having something he likes on the plate, he can have more of that if he refuses the rest of the meal. Early on, I modified they way my husband and I ate from when we were introducing solids, so that I didn’t have to make two meals (who has time for that!) so that we all sit down together for a meal, and no-one gets any special treatment or other options. I think this is another crucial part of the puzzle. Toddlers are very in tune with their appetite, so if he is not hungry I trust that he knows what he is doing and I don’t force him to eat more than he wants. Many times he has gone to bed after eating a very small dinner and he hasn’t woken any more frequently that usual (although I understand the stress this creates in the parent’s mind – sleep is equally as important as dinner!)

Here are some other ideas of how to make vegetables interesting:

Making a breakfast or lunch smoothie with lots of berries and fruit to make it look and taste appealing, but adding other veg in there – beetroot is a wonderful one – the colour is very enticing to toddlers. Often toddlers have a time of day where they eat less, so you could serve this up at this time of day. Just a couple of gulps would be a very nutrient dense “snack”. 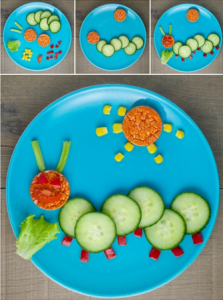 Using different colours on the plate. This is a good rule for anyone but especially when toddlers are exploring their world – learning about colours is very exciting. Counting how many colours are on the plate, exploring the different shades of red, green, yellow can make the meal interesting.

Making pictures with food is another good idea to make the plate look appealing. I know many parents who get very creative with how they serve up dinner and lunch. (the picture to the left is from http://www.eatsamazing.co.uk/recipes-tutorials/fun-and-easy-food-art-for-babies-toddlers)

Playing games with food. For example, who will eat all their carrots first. Try not to rush though, we don’t want to set up a gulping competition.

Crunchy textures are very appealing to toddlers. I often will chop up a tasting plate for lunch where we have carrot sticks, cucumber, capsicum, cheese, and cherry tomatoes (as an example) and when we eat it we listen for the crunch. My little one LOVES it and thinks it is the most hilarious thing ever. Raw snow peas are a regular vegetable at dinner time too.

Get them involved in cooking as early as you can. I started this from about 18 months with tipping and pouring ingredients into a bowl when I was making a cake or a zucchini slice for example. My toddler loves juicing as well. My husband chops up all the vegies and fruit and my son will stand on his step at the table and put all the items down the chute. He loves it.

Hiding veg in food in my opinion should be a last resort. I know many parents do it out of desperation as they are worried that their child is not getting enough vegetables per day. I have done it a few times – mainly when making cakes, I will often put beetroot or carrot pulp in (left over from our juicing) which is an added bonus of a high fibre cake. There are many cook books out there on how to do it, so I wont go over old ground here. But personally I would prefer to be upfront with my child and tell him what is in his dinner.

Ultimately this is an area where you have little control of as a parent. Sometimes kids realise this and will take advantage of it. For us as parents, we need to (sometimes) learn to let go and pick our battles. If the dinner table is a fun place to be, rather than a clashing of wills, then everyone will be happier. One great lesson I have learnt as a parent is that everything is temporary. Kids grow and change so fast that nothing lasts long and before you know it they will be 15 and eating everything in sight!

I hope this gives you some good ideas.

Please leave a comment below on other strategies you use, or whether something is really successful for you. I would love to hear what you think.